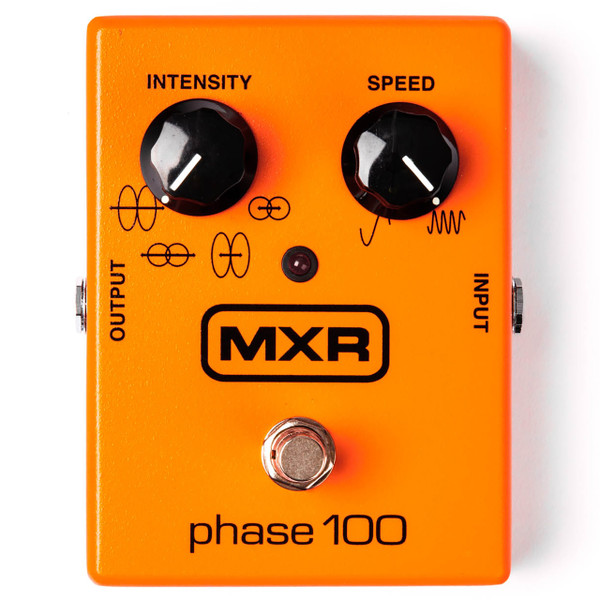 This big brother of the Phase 90 offers an even broader range of sounds. Along with the speed control there is a 4-position rotary switch that selects between four different intensities, defined as preset waveform patterns. Great for guitar, bass, keys, vocals, and more!

First introduced in 1977, the MXR Phase 100 is an extremely versatile 6-stage phaser developed for players who desired a broader range of sounds and a more pronounced modulation than what the Phase 90 (4-stage) or Phase 45 (2-stage) could provide.

As with other members of the legacy MXR line, the current Phase 100 stays true to its beginnings by being made with the same vintage-style photo resistors that were present in the original models. For each pedal, these components are all hand-selected and matched at Dunlop's Benicia, California factory to insure the most lush and musical modulation.

The most signature feature of the MXR Phase 100 is the rotary "INTENSITY" control that lets the user select between four forms of phasing modulation. The settings allow for various combinations of differing modulation depths (expressed by the "circles" graphic) and widths of the frequency sweep heard in the modulation (as expressed by the "arrow" graphic.) An equally easily-to-operate "SPEED" knob allows for a wide spectrum of phasing rates; from a subtle and slowly developing "swoosh" all the way to fast stuttering and psychedelic undulations.

Through the years the Phase 100 has proved to be a wildly successful and useful effect for not only the guitar but also bass, keys, vocals, and electrified acoustic instruments.

One hundred percent analog circuitry, hardwire bypass, an LED status light, and a 9-volt adapter/battery powering options round out this amazing pedal. Used by itself or in tandem with other pedals to enrich those effects, the MXR Phase 100 delivers a wealth of tonal options while still retaining the straightforward, no-nonsense operation and organic analog sound of MXR.