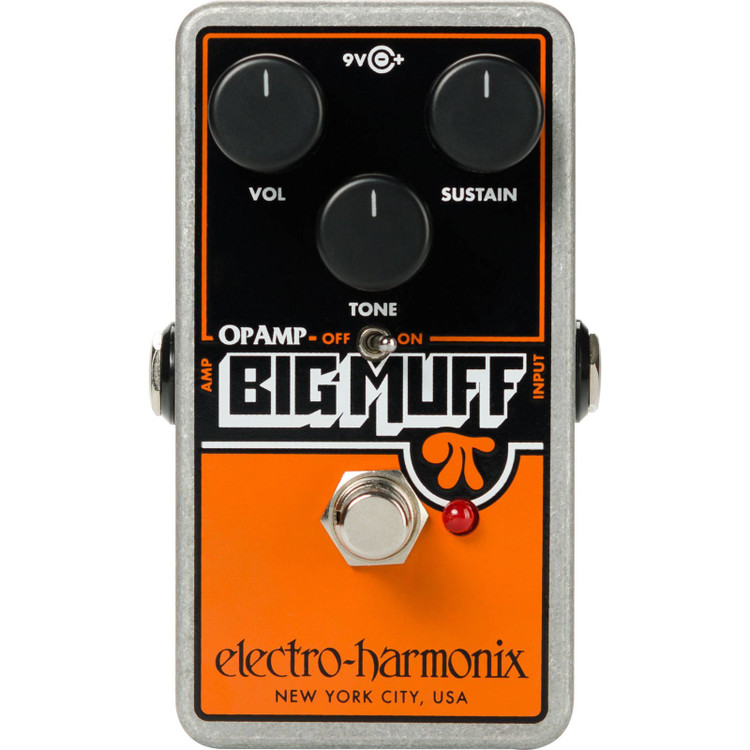 With original late-70s Op-Amp Big Muffs selling for exorbitant prices, Mike Matthews decided to take the power to the people and reissue the classic pedal at a price that players could afford! The circuitry of the new Op-Amp Big Muff —sometimes also referred to as the IC or V4 Big Muff— has been faithfully re-created while several practical enhancements have been added including a compact, die-cast chassis and true bypass switching.

“The Op-Amp Big Muff was popularized by the brilliant Billy Corgan who first used it on the Smashing Pumpkins’ epic 1993 album Siamese Dream. After he was videotaped playing and talking about the reissue, Billy stated: ‘The magic’s still in the box, I can still get what I’m looking for!’” - Mike Matthews

The pedal relies on op-amps rather than transistors and three gain stages rather than four, to create its signature sound. It’s a sound that’s been described by noted Big Muff collector and historian, Kit Rae, as: “a huge, crushing Big Muff sound with more crunch… great for grungy, wall-of-sound distortion, heavy rhythm playing and heavy leads.”

TONE Control – Provides a range of sounds from high treble to deep bass. As you turn the knob clockwise the treble increases and bass decreases.

TONE Switch – Removes the TONE control from the circuit. This switch has been improved over the original Op-Amp Big Muff in that the volume remains the same in both positions.

FUZZ Control – Adjusts the amount of sustain and distortion

INPUT Jack – This 1/4" jack is the audio input to the Op-Amp Big Muff. The input impedance presented at this jack is 55 Ω?.

AMP Jack – This 1/4" jack is the audio output from the Op-Amp Big Muff. When the Big Muff is in bypass mode, the AMP jack is connected directly to the INPUT jack.

9V Power Jack – The Op-Amp Big Muff is powered from a 9V battery or you can use an optional 9VDC AC Adapter capable of delivering at least 25mA to the 9V power jack, such as the EHX9.6DC-200. The AC Adapter must have a center negative plug. The battery may be left in or taken out when using an AC Adapter. The Op-Amp Big Muff has a current draw of approximately 5mA at 9VDC.

We recommend the Electro-Harmonix US96DC-200BI AC Adapter to power your Op-Amp Big Muff.

To change the 9-volt battery, you must remove the 4 screws on the bottom of the Op-Amp Big Muff. Once the screws are removed, you can take off the bottom plate and change the battery. Please do not touch the circuit board while the bottom plate is off or you risk damaging a component.